It’s time for my weekly gratitude post and this week I’m feeling extra grateful for my husband. It’s still feels weird to say that word… Husband. I’m 24 years old, married, and own a home… it sure seems like I’m doing everything right.

Well there’s no way that I’d be where I am today without Blake. God had a plan for us that I never would have imagined when we first met. 7 years ago we fell in love but we were young and immature and we broke up a lot. At one point I had accepted the fact that we weren’t getting back together and during that time I was able to find out who I was without him.

After our first year of marriage I can confidently say that I would marry him over and over again given the opportunity. Marriage is not something to be taken lightly. It can be hard work and both people have to make an effort. The scary thing is that no matter how compatible you are, people change and life can get in the way. But if your relationship is worth the time and effort, you don’t give up. You evolve together and fight to make it work.

That being said, I know that all relationships are different. But here are some of the things that are important in my relationship and why I am so grateful for Blake.

He never lets me forget my self-worth

He loves me regardless of my flaws

– Nobody’s perfect, we all know this. I can be an emotional person but Blake loves me even in difficult times. When we were living in North Carolina I was starting to feel really lonely and far from home. Without a job I felt worthless, but he told me that he loved me and that he was grateful that I was there for him.

He agrees with me

– Of course we have our disagreements at times. But for the most part we agree on what’s important. Aside from the big stuff that we usually agree on, I really love when he agrees with one of my small opinions about home decor or something else that makes me happy.

– Gentlemen are a rare breed these days. Blake has grown into such a polite, respectful and kind hearted man. Not only is he respectful of me but also everyone around him. It makes my heart happy to see him go out of his way to do kind things for other people. This quality is something to be revered.

If you’re married or in a relationship, I hope that your significant other makes you feel grateful in some way. Life gets crazy sometimes but it helps to have a partner to get you through it.

What or who are you grateful for this week? 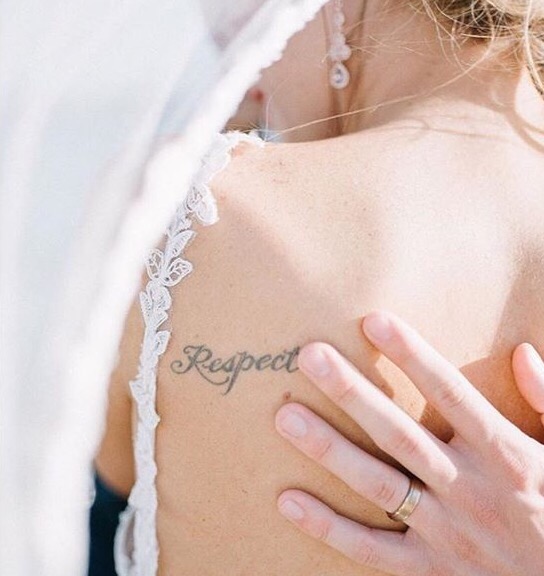 My parents, similar to many others I assume, had always made their hatred for tattoos very clear to me throughout my life.

It’s understandable really, my parents grew up in a time when the majority of people with tattoos were either in prison, a gang or affiliated with some other thing that was looked down upon.

As I got older and many of my friends and peers started getting or talking about getting tattoos, I tried a few times to slip it into the conversation when my parents were around. We would see someone with a tattoo out and about. I would say, “I’m going to get a tattoo”, my dad would scoff, “You better not!”. I would always get the “If you live under my roof you follow my rules” saying or something of the sort. So I figured I would just get a tattoo when I was a few years older and moved out on my own.

Until one night. I was 19 and my best friend and I started talking about how badly we wanted one. The conversation began as a hypothetical “what if” type of talk, but soon turned into a very realistic “let’s do it!” conversation.

We talked for quite a while about what we would want to get. Something small, just to see how it felt and make sure we could handle it. But what? It couldn’t be anything that we would look back on in a few years and think, man that was stupid! With our funds it had to be small anyway, so we figured we would each get a word that holds a lot of meaning to us.

We went through so many words, I think a dictionary might have even been involved at one point. I just kept coming back to “Respect”. I knew it seemed so cliche but for me, this was the word that held the most meaning.

I try so hard in life to have respect for everybody no matter what differences we may have. Whether someone has different religious beliefs, personal views or a different cultural background, we are all human and the least we can do is treat one another with respect. I recognize respect as any simple act of politeness.

Alyse chose “Loyalty”, which held a lot of meaning to her for her own personal reasons, but I think anyone can agree that loyalty is important. In any relationship whether a friendship or a romantic relationship, being loyal is the key to keeping the trust.

So there we were, sitting at my dining room table on the phone with a tattoo parlor making arrangements to come in as soon as possible. We were scared, but excited.

I decided to go first. I was worried that I might back out if she went first and made it look too painful. I don’t remember exactly how it felt but it really wasn’t bad. I just remember clenching my teeth at one point- then it was over.

We left the tattoo shop in so much excitement and disbelief that we had actually just permanently marked our bodies. WOO!

I sometimes get asked whether I regret getting it. I don’t. I guess if I could change it I would have probably just gotten it somewhere else, a spot that would be easier to hide. Because hiding it from my parents for so long was torture. I got it on my left upper shoulder blade because it was the cheapest spot, HA! Now that I don’t have to hide it I guess it doesn’t matter anyway. Not being able to wear tank tops around my parents in the middle of summer was death.

My mom found out about it first. We were at the mall and the purse on my shoulder had pulled my shirt over just enough for her to see a little bit of ink. Immediately she said “WHAT IS ON YOUR BACK?” I was terrified (anyone who’s seen my mom angry would understand). I told her it was a tattoo and she said “PACK YOUR BAGS WHEN WE GET HOME!, YOU’RE MOVING OUT”. She was obviously being dramatic, she loves me too much to kick me out on the streets. Eventually she got over it.

I guess you could say that I was pretty successful at hiding it from my dad because he didn’t find out about it until my wedding day. I knew it was going to be impossible to hide with a low back dress that had small lace straps. I tried everything to hide it- tattoo covering makeup, skin colored temporary tattoos, you name it. None of it worked, it just made my skin look all discolored.

So on the morning of my wedding day- I forced my two best friends to come with me to meet him for Starbucks and that was where I broke the news. I knew he couldn’t be that mad, I mean it was my wedding day and my friends were there to cushion the blow.  He was obviously disappointed and said something along the lines of “I made a perfect child and you go and ruin your body with a tattoo”. He cracked a few jokes and then got over it.

But I  really don’t regret it at all because even though its just a small tattoo, it holds a lot of meaning a good memories with it.

Will I get more? Maybe, but it definitely won’t be on a whim next time. I think it’s important to wait a year to get a tattoo that you’ve been wanting. A person can change a lot in a year, not to mention a lifetime. So just make sure that if you are planning on getting a tattoo, that it isn’t something trendy or meaningless. Our generation has transformed tattoos into something so normal that it’s almost weird to meet someone who doesn’t have one.

Don’t forget that your body is who you are, it pumps your blood and keeps your heart beating- the least you can do is make a conscious decision as to what kind of markings you’ll have on it for the rest of your life. Tattoos can be beautiful, like art. But they have to be well thought out and done by a talented artist.